Blue Hawaiian Cleanse is a proprietary blend of the following all-natural ingredients. It is this unique blend that allows nature’s natural laxative and colon cleanser to work without dehydration, cramping or any of the typical side effects of medical laxatives. 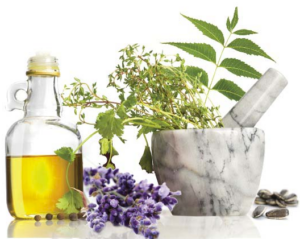 Internal functions of coconut oil occur primarily due to it being used as cooking oil. Coconut oil helps to improve the digestive system and thus prevents various stomach and digestion-related problems including Irritable Bowel Syndrome. The saturated fats present in coconut oil have antimicrobial properties and help in dealing with various bacteria, fungi, and parasites that can cause indigestion. Coconut oil also helps in the absorption of other nutrients such as vitamins, minerals, and amino acids.

Senna leaf acts on the intestinal walls, causing contractions that lead to bowel movements. In this regard, it can be used to effectively relieve even the most severe cases of constipation. Because of its glycoside content, which helps transport electrolytes, it helps to cleanse the colon creating a bowel movement that usually occurs within six to 12 hours after it is taken.

Flax is high in both soluble and insoluble fiber. Flax promotes regular bowel movements because it is high in insoluble fiber. Flaxseed’s all natural fiber helps to absorb water, thereby softening the stool and allowing it to pass through the colon quickly. When adding fiber to the diet, it is important to make sure that the person drinks at least eight glasses of water daily. Without enough liquids, fiber can actually cause constipation.

Psyllium seed husk is a partially fermented dietary fibre from Plantago ovata that increases stool weight and promotes laxation by its presence in stool and by increasing the moisture content of stool.  In a study, it was proposed that the unfermented gel isolated from psyllium containing stools functions as an emollient and lubricant. The greater ease of passage, gentleness, and softness reported by the subjects and the isolation of a very viscous fraction supports this hypothesis.

Unlike most natural laxatives, cascara sagrada offers near-immediate relief from constipation. Instead of providing fiber, cascara sagrada works by irritating th lining of the bowels and increasing the rate of digestion.

Soluble fibers such as Glucomannan have many health-promoting benefits due to their ability to form a soft gel with water. Research indicates that soluble fibers help lower blood cholesterol, slow glucose absorption, lower the Glycemic index and promote regular bowel movements. Derived from Konjac root, glucomannan has an extraordinary water-holding capacity and is the most viscous of all known dietary fibers.

Glucomannan offers benefits for those seeking to lose weight. Studies show that supplementing with glucomannan enhances the weight-loss effects of a calorie-restricted diet. Glucomannan may promote weight loss in obese adults, even in the absence of a calorie-restricted diet. When obese adults consumed 1 gram of glucomannan fiber one hour before each meal for eight weeks, they lost an average of 5.5 pounds of body weight—with no other changes to their eating or exercise patterns.

The most common use of aloe ferox is for laxative purposes. A study published in 2004 by Alimentary Pharmacology and Therapeutics, by L. Langmead, looked at the effect of aloe on patients with irritable bowel syndrome. Forty-four patients were given either oral aloe bitters or a placebo. At least 30 percent of the study participants on aloe showed either clinical remission, improvement or response compared with only 1 percent of patients on the placebo. It is thought that taking aloe for four weeks may reduce symptoms of IBS.

The health benefits of slippery elm are rooted mainly in its soothing properties. It is thus effectively used as a mucilaginous herb internally to coat and soothe mucous membranes while also absorbing toxins which can cause intestinal imbalances. Slippery elm is an effective remedy for duodenal ulcers, gastritis, diarrhea, colitis, irritable bowel syndrome, hemorrhoids and heartburn.

The Cherokee have used the viscous inner bark of the slippery elm to prepare a healing salve, and in herbal medicine it is used as one of the best possible poultices for wounds, boils, ulcers, burns and all inflamed surfaces, soothing, healing and reducing pain and inflammation.

Oat bran has long been touted for its soluble fiber.  About one-half of the fiber in oat bran is soluble fiber, the type that lowers LDL (bad) blood cholesterol.  Soluble fiber is a soft fiber that absorbs water as it moves through the digestive tract.  In addition to helping lower cholesterol, it also keeps blood glucose levels in check. Technically, oat bran is not a whole grain (since it’s actually only one part of the oat grain). But because of its exceptionally high fiber content, it can be considered a whole grain.

Black walnut tones and helps heal inflamed tissues. It is also said to be effective in enhancing the elimination of various microbes from the bowel. Herbalists also recognize it as a thyroid stimulant since it is relatively rich in the trace mineral iodine.

Ginger’s most well-known medicinal use is as a digestive-aid, to relieve tummy pain, nausea and diarrhea, as well as morning sickness and travel sickness. This is thought to be because of the spice’s high levels of gingerol; a powerful component that gives it its natural zingy flavor, and which acts as an anti-inflammatory in the body.

Apple pectin can be an alternative to promote desired intestinal health without the use of chemicals, in other words: a healthy detox. Maintaining a healthy digestive system is essential for any weight loss program and, therefore, apple pectin supplements are now being promoted for diet and weight loss.

Pectin is a source of soluble dietary fiber and can significantly improve overall digestion. Several fruits are rich source of pectin, including peaches, plums, and, of course, apples. Apple pectin is a soluble fiber considered a general intestinal regulator and many medicinal preparations have been used as an anti-diarrhea agent

Carrots contain mostly soluble fiber, which aids digestion. Soluble fiber dissolves into a jelly-like substance during the digestion process. Because fiber is not absorbed by the body, the soluble fiber in carrots travels throughout the digestive system. Soluble fiber increases the weight of your feces by adding bulk to it. This helps move the waste through your gastrointestinal tract and keeps you regular